I like the idea of walking into a party and having something to get involved in right away, so I often have a number of different activities going on and the kids can do the rounds. It does involve having other adults to help you. These are the activities we had at Goose’s Japanese party. 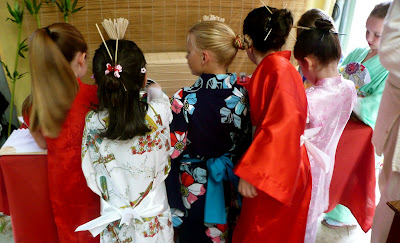 CHERRY BLOSSOM TREE PICTURES
I painted a branch and photocopied it onto pieces of card. We provided some geisha girl stickers, some cherry blossom shaped cutouts (punched out using our origami scraps & some Japanese writing) and some leaf shaped stamps & Japanese symbol stamps (that I already had in my stash) along with some red ink and some pink tissue paper to scrunch up and make their own cherry blossom tree picture. This idea was borrowed from here. 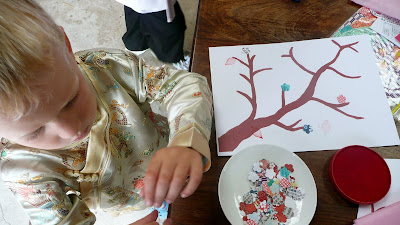 ORIGAMI PAPER FOLDING
We had an origami paper folding table set up with origami paper and printed a few simple origami animal shapes from here and stuck them on the wall with one of each that Goose had already made up. This is the first activity most kids headed for. You can see the table in the background of the photo below. 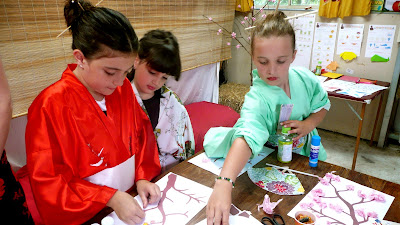 PAPER FAN DECORATING
I found some blank paper fans at Riot Art and the kids decorated them with textas. Thanks Anna for the idea! 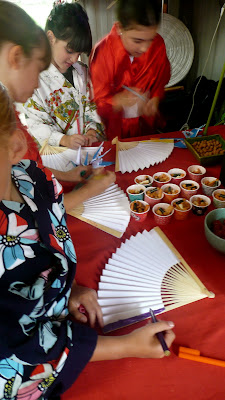 GIANT MIKADO (AKA ‘PICK UP STICKS’)
If you’ve never played this game, see here for more details. This was my Mum’s set that she has had for years, but I have seen them for sale at Australian Geographic. 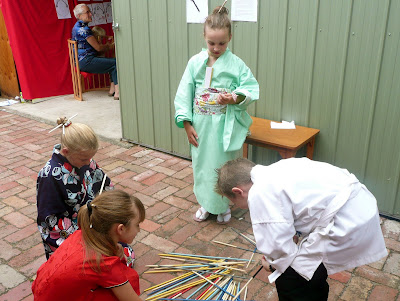 FUKUWARAI
Translated “Lucky Laugh” in English and traditionally played around New Year in Japan. Just like Pin-the-Tail-on-the-Donkey, players are blindfolded & must try to stick the eyes, nose, mouth & cheeks in the correct places on the face. Thanks to my sister Clare for drawing the face!
You can find more information on the game of Fukuwarai here and some free Fukuwarai printables here. 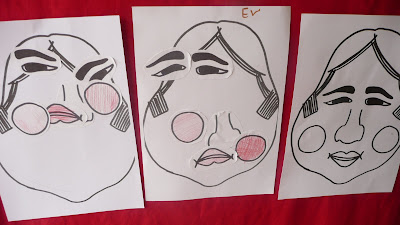 We also did pass the parcel on the birthday girls request, which we played to the music of the 80′s classic ‘Turning Japanese’ by The Vapors and had a Guess How Many Japanese Lollies in the Jar competition.