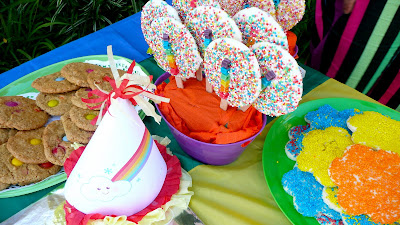 Finally I can share with you some photos of the wonderfully impressive rainbow party that I mentioned we went to a couple of weeks ago! 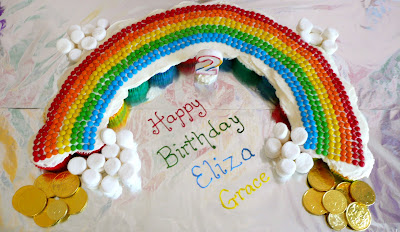 The cake was fantastic and was made up of many different cupcakes underneath a slab of icing. M&M’s were used to create the rainbow, marshmallows for the clouds and some chocolate money at the end of the rainbow. The best thing about the cake was that each individual cupcake had rainbow layers!* So clever! 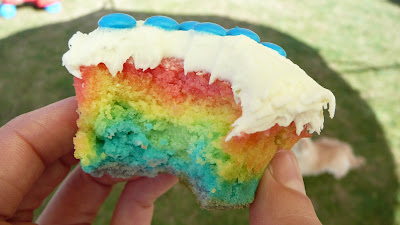 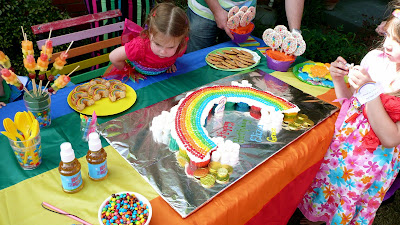 Some of the many simple & effective things that I liked at the party were:
- the fruit sticks in rainbow order - cut into flower strawberries/watermelon, rockmelon, pineapple, kiwi fruit, purple grapes.
- pass the parcel with each layer wrapped in a different colour of the rainbow. The children had to do an age appropriate activity (eg. sing a song, clap your hands above your head) in order to receive a packet of smarties.

Perfect for a 2 year old birthday party, the backyard was filled with colorful toys from the ‘party pack’ at the local toy library, which even included a rainbow coloured parachute that was used to cover the hills hoist. 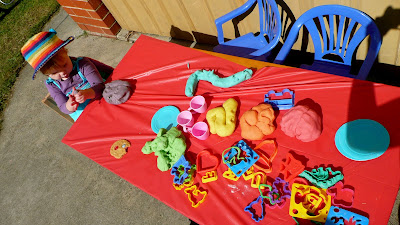 The rainbow playdough was a party activity and then put into ziplock bags as a simple & inexpensive take home party favour. 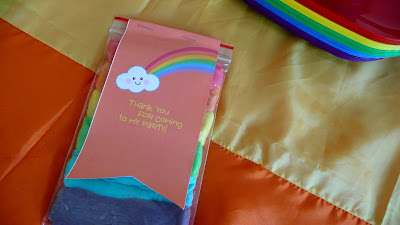 Stay tuned later this week for another fantastic party that we went to the following day – pirate themed!
Don’t forget to link up your own parties or get inspired over here at our ever expanding DIY Party Linky!
(There are two other rainbow parties there already)

* If you are interested in a simple tutorial on how to make the cake, let me know as she took photos throughout the whole process!