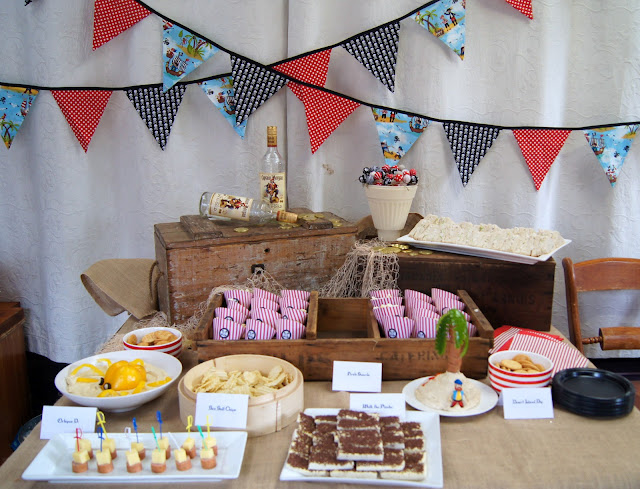 We celebrated Bear’s fifth birthday on Sunday with a pirate party! Bear is particularly keen on pirates so it was the perfect theme for him!  He had an absolute ball which is, after all, why we go to all the effort!  As per usual, I’ll separate the party into two posts.  This one about the food and the next about the activities or we’d be here all day! 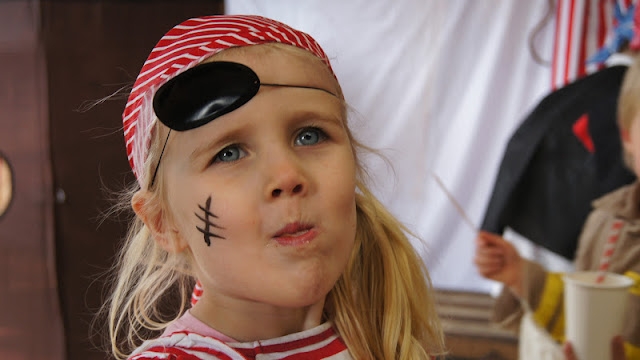 To put it into perspective our party was held at 2pm with roughly 20 children and 20 adults.  I usually seperate the food into two sittings, savoury while the activities are going and then dessert served with birthday cake at the end.
SAVOURY 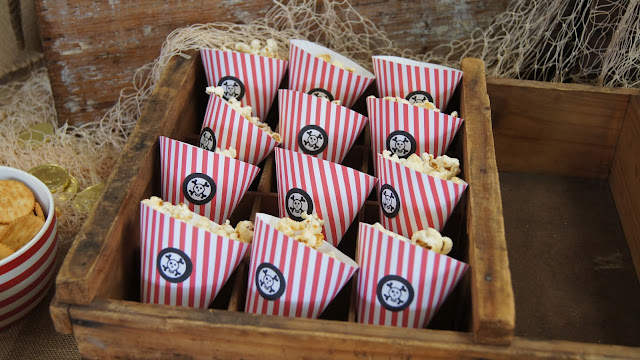 popcorn in cones - I use this template to make my cone shape & I always use the sweet & salty flavoured popcorn premade at the supermarket.  It’s delicious! 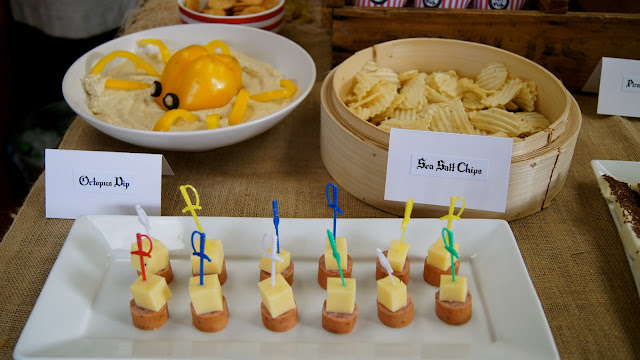 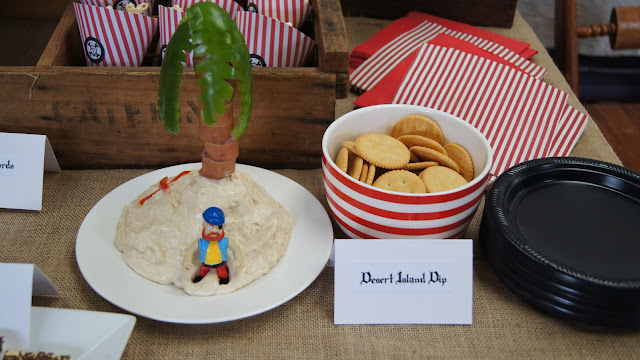 desert island dip - french onion dip over a block of cheese to secure the cabana skewer & toothpicks to secure the capsicum leaves.  Red capsicum ‘x’ marks the spot.  Saw it here & just had to try!  The dips looked awesome, but it’s never a popular party food 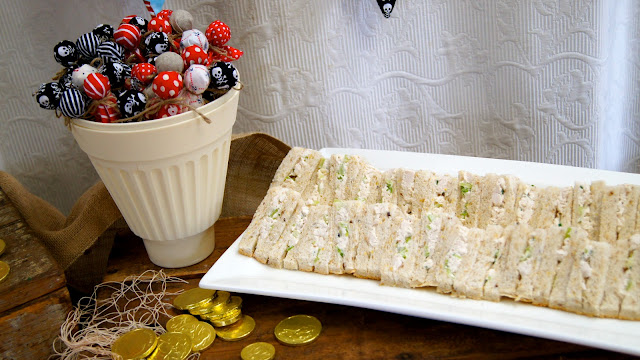 chicken sandwiches – recipe here. Thanks to my sister Lou for making them!
squid - thanks to my friend Susannah who inspired this one! You cut six slits into the bottom half of the hot dog prior to cooking and as soon as you pop them into the water to cook, they just curl right up.  These were a huge hit! 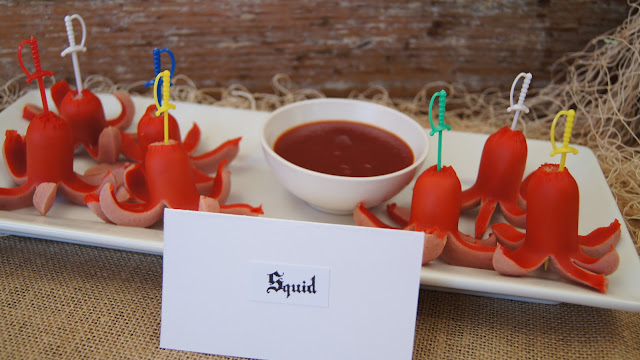 egg & bacon pies - we have these at every party.  The recipe is here and you can freeze them weeks in advance.
sausage rolls - you can make and freeze these weeks in advance also.  I can email if you’d like my recipe. 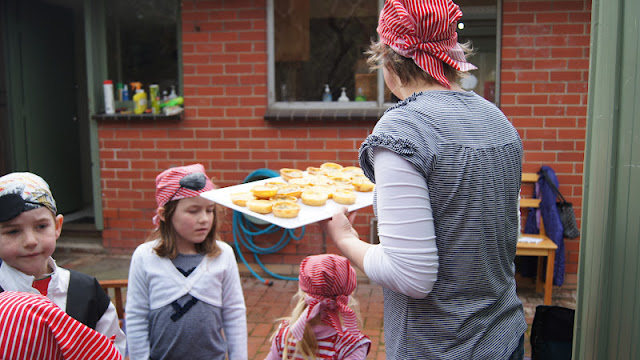 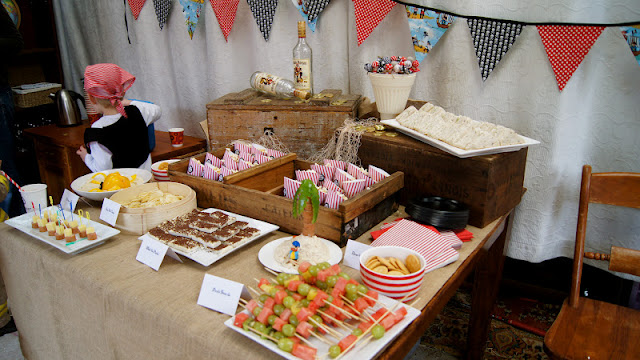 DRINKS
water bottles - decorated just like the invitations with old maps and twine.  Should I admit that I chose the bottles at the supermarket that had a little wave print on the bottle…it matched the theme… 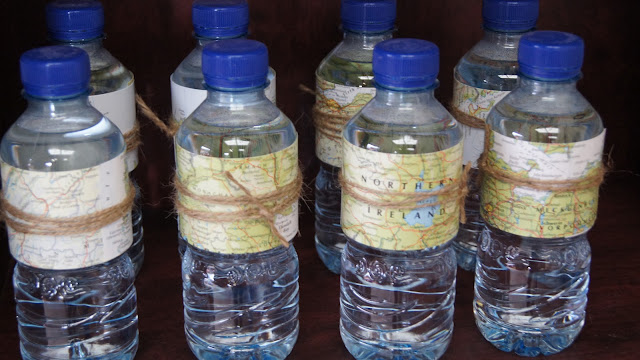 white cups with red stripy straws - So much easier to find your drink if you name the cups and it saves on costs too!  We had a drink dispenser with fruit juice cordial in it alongside the cups for the kids to help themselves. 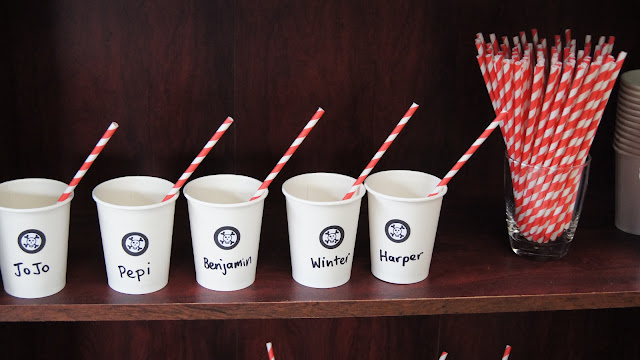 tea & coffee - set up for adults to help themselves along with kettle, milk, sugar, teaspoons & disposable mugs.  These teas are the Madame Flavour ones from the supermarket, ‘coz I think they look a little fancy…
There was a small amount of wine & beer for the adults as well, but no need for a photo of that one at a children’s party…. 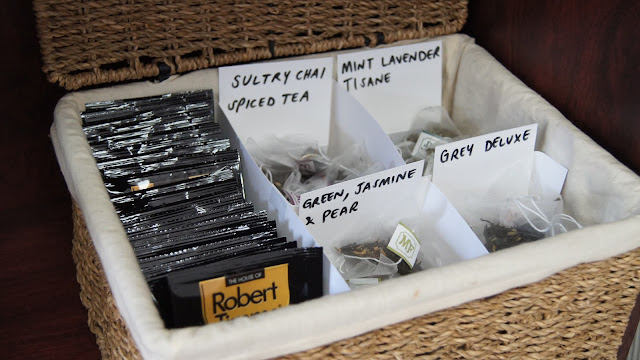 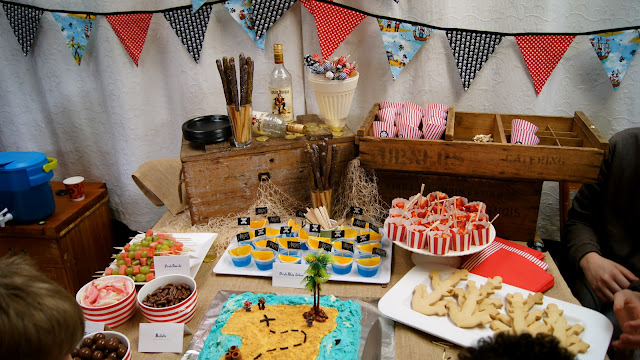 strawberries – served in stripy cupcake holders with little wooden forks.  You might recall seeing these at a certain fireman party a couple of weeks ago… Lou always has awesome party ideas and at this party, just like hers, they were a big hit with the kids and disappeared quickly…. this will become a new party staple! 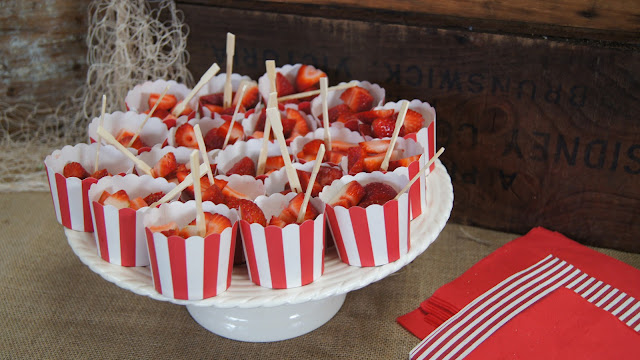 pirate swords – the new must have at every party, coz the kids love them.  Grissini bread sticks dipped in chocolate.  These swords were covered in gold and silver edible glitter. 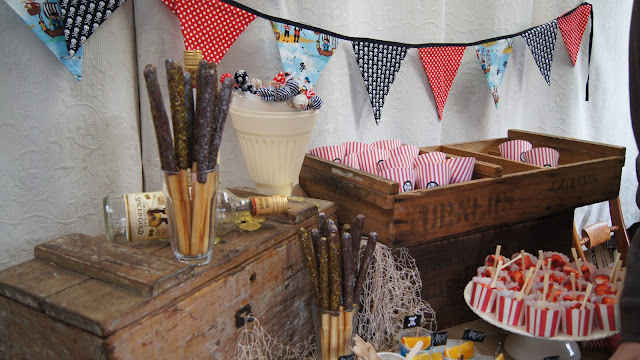 lollypops – wrapped in pirate fabric scraps & twine.  Fabric leftover from the gorgeous bunting that my sister made last year for her son’s pirate party and kindly lent to us! 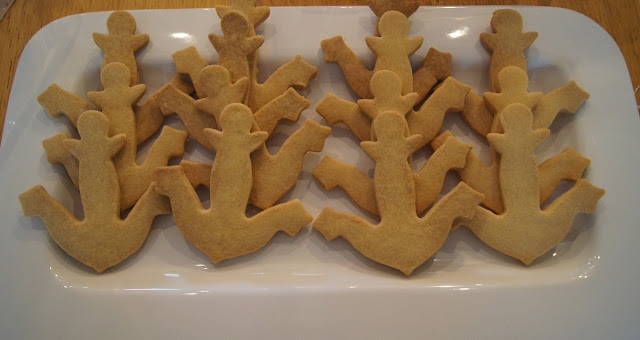 anchor biscuits - my faithful shortbread recipe can be found here.  These can be made days in advance which is always a winner! 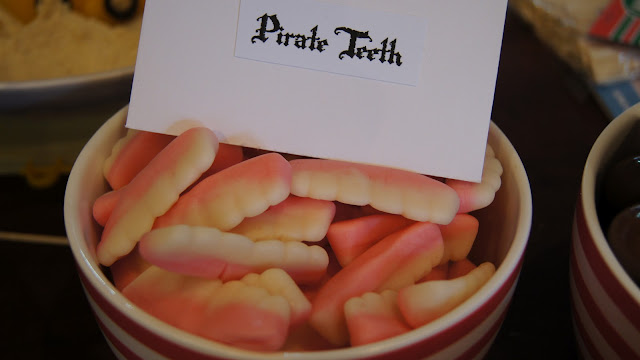 cannon balls, pirate teeth & bullets - lollies in stripy bowls.  These were a steal at $2 each from kmart – bargain! 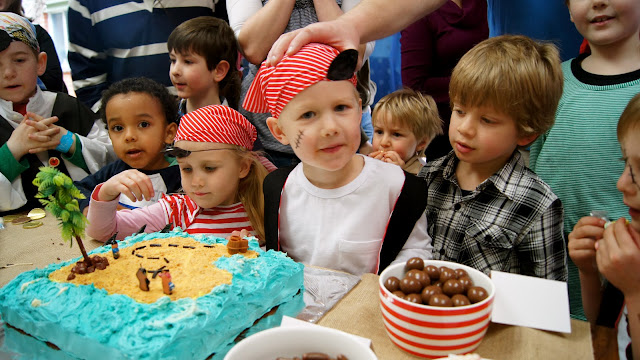 THE ‘TREASURE MAP’ BIRTHDAY CAKE – let’s face it, this is the most important part of the party as far as most kids are concerned and particularly for the birthday child.  This fact always causes me no end of stress at 1am the night before the party which is when I always seem to be decorating the cake!  Thanks to some awesome tips from Simmoney (you must check out her son’s neverland party!) one sister for baking the cake and the other for helping me style the ocean, this cake caused very little 1am stress (although it was still decorated at this time) and I was very happy with how to turned out! 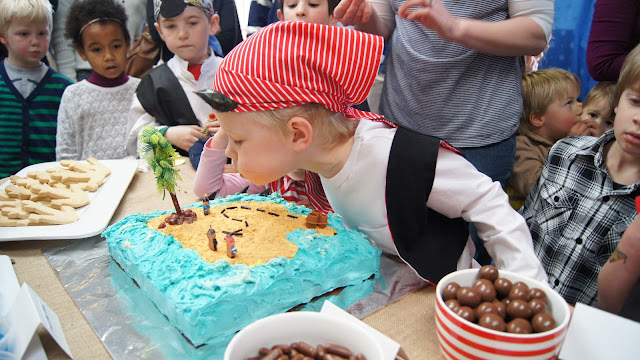 I even followed Simmoney’s tip of hiding some treasure (smarties) under the ‘X’ on the cake!  It’s all about the extra touches 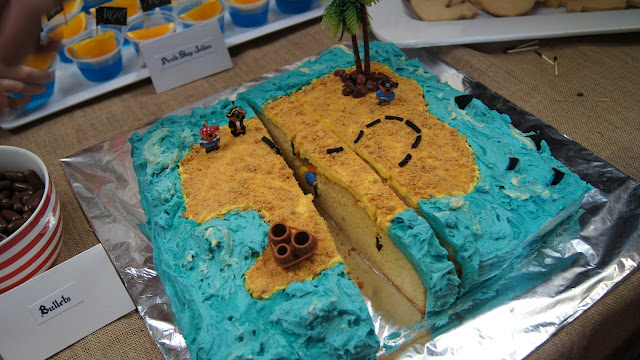 Just keeping it real – couldn’t have done it without the extra help in the kitchen!  As well as these two wonderful helpers, extra special thanks goes to both of my sisters for being ‘above & beyond’ party helpers who just ‘get it’. 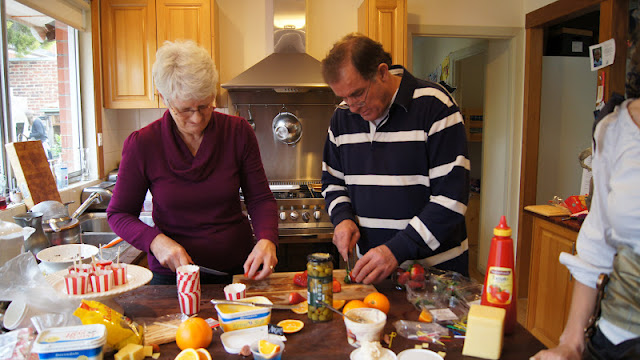 After all the info in that post, you should have all you need to have your very own pirate party, but if you do have any party questions, you know I always love to help when it comes to parties so please feel free to email!
Stay tuned for the next post with the pirate party activities!
What’s the next party you are planning?
If you’d like a squiz at previous parties here at Frog, Goose & Bear, just head over here.