Today is my 38th birthday.  I have always loved birthdays.  Although they do seem to get a little more uneventful as the years go by.  I don’t seem to put any where near as much effort into the celebrating of my own birthday as I do for my children’s birthdays.  Kudos goes to my own Mum for coming over yesterday though with a delicious afternoon tea to help me celebrate … and for cleaning up afterwards (which, if truth be told, was just as wonderful as the afternoon tea itself).  Maybe the desire to make birthdays special for our children never disappears.  My Mum has always been a birthday queen.  I inherited my love of going over the top for kids parties from my Mum.  Back in the 70′s & 80′s, long before themed parties were all the rage, she was getting right into it! 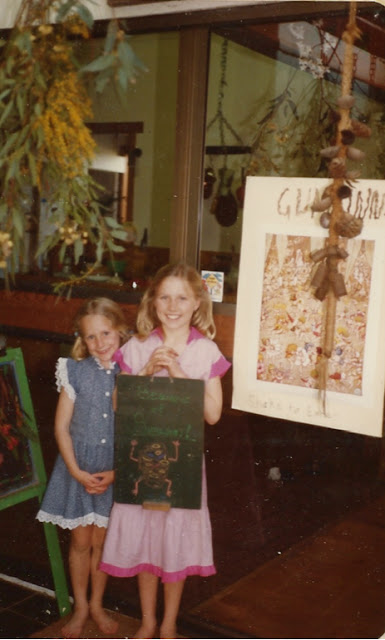 These photos are from my ninth birthday.  Twenty nine years ago in 1984.  The theme was ‘Snugglepot & Cuddlepie’ from the classic May Gibb’s storybooks.  The chalk board that I am holding in the photo above says Beware of the Banksias written in the squiggly writing of the gumnut babies.  The handmade poster behind me says ‘Gum Inn’ – shake the bell (referring to the gumnut covered dangly thing in front of the poster).  That’s my sister Lou standing next to me. 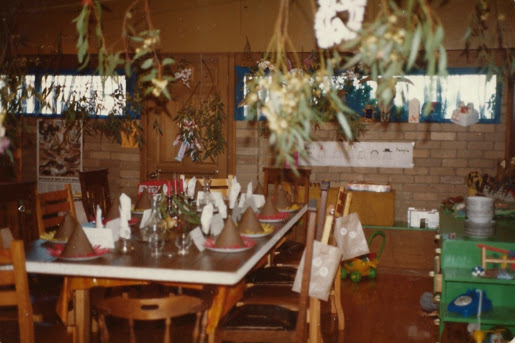 Gum branches covered in blossoms were hung all throughout the toy room.  We had the best toy room as kids.  It was originally my Dad’s veterinary surgery and we lived behind, until he moved the surgery down the road and we converted the space into an extra large playroom at the front of the house that opened out into the kitchen. 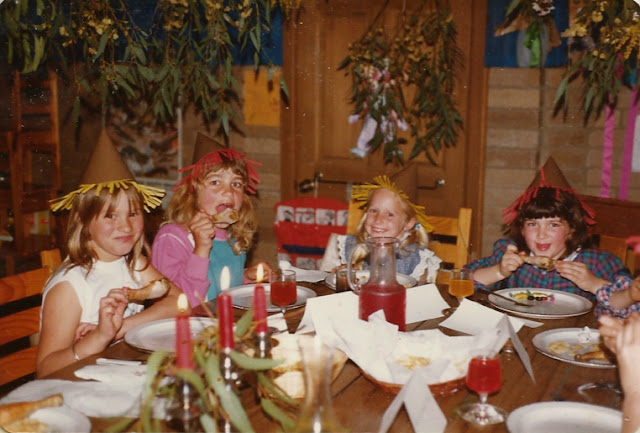 We had gum blossom party hats made from brown card and crepe paper and it looks like we were allowed to use the fancy glasses and candles too! 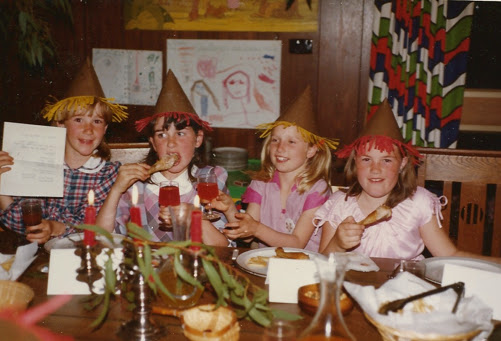 My friend, Felicity is holding up a menu with bush type names for all of the food we are eating – written in the squiggly writing of course. 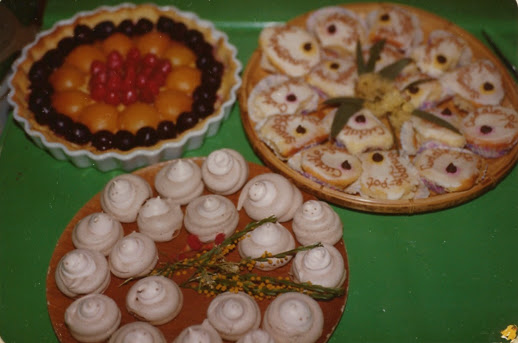 She even decorated the plates with gum blossoms & wattle sprigs on the plates and piped the names Snugglepot and Cuddlepie onto the cupcakes.  They’re meringues on the plate at the front, in case you were wondering. Every year, Mum made our birthday cakes out of vanilla icecream.  She moulded the icecream into shape, then melted small amounts to colour with food dye and use as paint over the top to decorate.  I’ve never known anyone else to have done that. 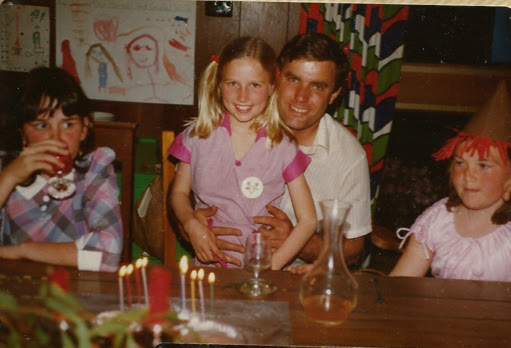 That’s me and my Dad in the photo above and my face covered in flour in the picture below after playing the flour game – one of our all time favourite party games!  You can read more about how to play the flour game in this post.  I hope you enjoyed my little trip down memory lane and maybe even some understanding of how I got bitten by the party bug! 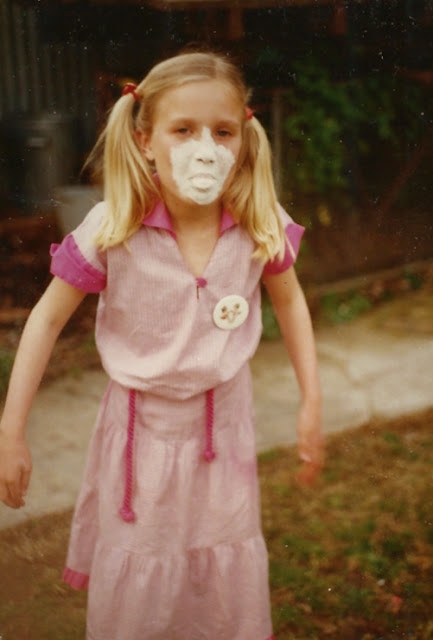 I think I have mentioned before that I have two younger sisters.  My sister’s birthdays are only 5 days apart and mine is a few weeks later.  Mum went all out with a separate party for each of us.  She involved us in all aspects of party prep and I have fond memories of all of us sitting down together making invitations, party hats and party bags.  We even decorated plastic plates with each persons name on them and then cover them in clear contact so they could still be eaten from.  We played the best party games like animal noises, the flour game, treasure hunts, dress up games, I could go on.  We even had lollies and stickers in each layer of pass the parcel long before it became fashionable.  She was way ahead of her time!  As we became teenagers they continued with Dad putting on big ‘It’s a Knock Out’ style games (remember that TV show?) set up in the farm shed which involved lots of mess!
This is really a thank you post to my Mum, who is an avid supporter of this blog and also an avid supporter of me.  Thank you for supporting me for the last 38 years and for throwing the best parties ever!  You always knew how to make each of us feel special and I can only hope that I’ll be as wonderful a Mum to my children as you are to us.  xo